I got waylaid this year by life so am a bit behind schedule.

But it ‘s not too late for you to catch the last few days of this mammoth event which runs to February 3 in Glasgow.

END_OF_DOCUMENT_TOKEN_TO_BE_REPLACED

Many years ago, in East Hampton, Long Island, New York, my mother, Janet (Jenny) MacCormick, and my two sisters, Morag and Fiona, were living with our families in the same community for the first time in over 18 years.    My two boys, Neil and Gunnar, along with Fiona’s girls – Janet, Elizabeth and Fiona – in the summer when not frolicking at the beach – either at Wyborg, our favourite ocean strand or at Maidstone where the gentle waves posed no threat to the young ones –  or playing in a miniature city they built in our back garden – all required entertainment.  I had an old Kalamazoo Sport Model guitar (not the instrument at which I was best skilled) and managed to strum some basic chords on it to accompany the kids on various songs such as The Three Craws and an amusing version of My Bonnie (with such memorable lines as “I stuck my feet out of the window, in the morning my neighbors were dead.”)

in these blessed days, my family of four would drive from our apartment in Fresh Meadows, Queens, to our place in the Hamptons almost every Friday night in the fall, winter and spring.  In the summer we would move out to our house in The Springs, East Hampton.  I had to work in Manhattan in the summer  so commuted on the Long Island Railroad every Friday night to spend the weekend in our paradise with our families.  This produced a weekly event – meeting my train at The East Hampton station.  I have a couple of photos taken there.  (My wee sister Fiona, up to her usual mischief, one Friday evening, led the kids to my coach as I got off, screaming “I want your autograph,” causing a bit of a stir because the area had many famous residents such as Dina Merrill, and unknown to us then, Leonard Bernstein, as well as the artist, Willem deKooning.

That  train trip  also stimulated me to invent a song to be sung with accompaniment on my Kalamazoo guitar – The Long Island Railroad Song.  It is pure doggerel.  But for those of us still around, full of memories.  My sister Fiona’s second born, Liz, now in Charleston South Carolina, tells me that on the rare occasions she travels to the Hamptons by train from Penn Station, she sings and teaches her daughter the chorus of that epic.

So here it is, to be sung to that famous tune, Casey Jones composed by Wallace Saunders.

You get to Penn Station with  ten minutes to go or less,
Coz your cab got caught in a crosstown  mess,
The line to get a ticket is incredibly slow
But you make it to the train just as they close the door

The coach is really crowded, and there’s not a seat in sight,
But most are really happy, coz it’s Friday night.
We’re heading from the City to the beaches and the sun,
From noisy streets and stress to two days of fun.

Through the tunnel, under water, we pop out the other side,
Queens flashes by, we’re really rockin’.  Hold on tight!
We’re slowing down now, the Jamaica Rush is near.
Where we  run across the platform with all our gear.

Finally we’re pulling out, and some give a cheer.
Even those who have to stand are smiling ear to ear,
We know we’re heading east to our Promised Land,
And soon we’ll  be relaxing by the sea and sand.

The Fire Island folks are getting ready to debark,
For Cherry Grove, Saltaire, Davis Park.
Now us left on the train can stretch out with more space.
We’re more than halfway to our favorite place.

There used to be a bar car attached to this train.
If you had  to stand, they said, let there be less pain.
Now you have your water, healthier for you they say,
But for those who like it strong, g’nts are not  far away.

As we reach the Hamptons, West, South, Bridge and East.
Scores of family, friends  wait to take you to their feast
Of  fresh  scallops,  crab, bluefish and corn.
Makes you think of East Side restaurants with nothing but scorn.

One more place before the end of the line.
“Amagansett.” is    the conductor’s cry,
A little girl asks mommie “Have we got there yet?”
Daddy says, “Next stop – don’t you fret.”

VOICED
“But next time we’ll take the Cannonball!” 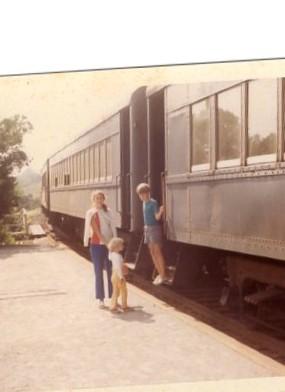 This indeed is a LIRR train in the East Hampton Station.  But it is not the train from Penn Station .  Just a one  stop fun  jaunt to Bridgehampton for  Kristina   Neil and Gunnar. I took the photo then raced the train in  our car to pick them up.

OOPS  this is probably cars in one of many railroad museums we visited back then and not LIRR cars.  but we can pretend, OK?

I am again a wee bit late this year.  But I encourage those of you within reach to hurry over and catch the outstanding performers at this outstanding event beginning January 18 through February 4 and help celebrate its 25th year.
See
https://www.celticconnections.com/Pages/default.aspx
(Perhaps for next year I can  persuade the Scottish Chamber Orchestra to play my Salute!)

Another bagatelle for piano.  As always, created “on the fly.”

Listen to the comments as well as the music .presented  here by two wonderful singers.

Merry Christmas to all.

P.S.  I just recalled that as a 12 year old, I was playing this piece with my school orchestra in Queens Cross Church,Glasgow, Scotland, when the E string of my violin snapped.  Such embarrassment but obviously such emotion in my playing!.

As you might deduce from the title of this blog site, I often create the lyrics for my own music.  But inspiration for the words is just as often in short supply in my head.

And so I decided to invite you lyric writers out there to listen to my tunes, the ones I think are begging for  sympathetic words.   If you f\eel inspired by the music, then put pen to paper or fingers to keyboard and string the words together,

This is a trial run  So I have not yet figured out how such an endeavor  might work out.  But \a couple of parameters come to mind.

1.  I will designate the character of the music, and thus the content of the  lyrics.  The first piece , attached below, is to   me  indisputably a Christmas Carol.    So lyrics with that content are  invited.

2.  My music is all copyrighted at the Library of Congress.  You should protect your submissions  as you see fit.

3.  Most of  my work is unscored which  can be a problem.  Although I have no theoretical music training (i.e., I cannot read/write music), I have Finale software.  That should enable me to produce a lead sheet if that proves desirable.

I have other as yet unformed thoughts which I will bash into shape later.  In the meantime here is the first tune,

Please let me have your comments on the idea.